There are dozens of highly recruited high school basketball seniors and hundreds of ranked prospects overall, but only two watched March Madness unfold with the satisfaction of knowing they committed to the school that won the 2019 NCAA title.

One of those Virginia-bound prospects is Kadin Shedrick, a 4-star center from Holly Springs High located in the heart of the Atlantic Coast Conference's Tobacco Road. The other is 4-star shooting guard Casey Morsell from Washington, D.C.

Shedrick, a 6-foot-11, 200-pounder ranked the No. 56 player nationally by 247Sports.com and No. 62 by Rivals.com, not only celebrated the victories, his commitment showed he understood Virginia’s ceiling better than many national media members – not to mention doubting fans.

They had lined up in a firing squad a year ago after Virginia was the first No. 1 seed to lose to a No. 16 seed in an NCAA Tournament, falling to Maryland-Baltimore County. They condemned Cavaliers coach Tony Bennett’s deliberate style of play to never winning a national title.

“That was a fluke last year,” Shedrick said. “They’ve lost six games in the last two years (35-3, 31-3), so one game wasn’t going to affect my opinion. They play good basketball. They had to improve to win the big game and that’s what they did this year.”

As they say, out of the mouths of babes.

And we shouldn’t let off the hook the one-and-dones that follow each other to form a super team at either Duke or Kentucky. They view those destinations as their best shot at a national championship in their college pit stop. Well, the Class of 2018 freshmen are moving on to the NBA empty-handed after not considering Virginia as a path. The one-and-done team-stacking trend that Kentucky coach John Calipari launched in the 2009-10 season has been rewarded only twice in the past decade, Kentucky in 2012 and Duke in 2015.

Shedrick has ended up with the best of both worlds.

He was a Virginia fan before he committed, yet he based his decision on more than winning a national title. As a top student leaning toward math fields, he factored in academics at an elite institution. Now he arrives on campus with confirmation Virginia more than a regular-season national power.

The Cavaliers don't typically attract one-and-dones, but Bennett does develop players and send them to the NBA. Bennett has had five players drafted since 2012, with potentially two more in 2019.

In the upcoming draft, redshirt sophomore De’Andre Hunter (6-7, 225) is projected as high as the No. 8 pick and junior Ty Jerome (6-5, 195) as a late first-rounder, although they haven’t announced their intentions yet. 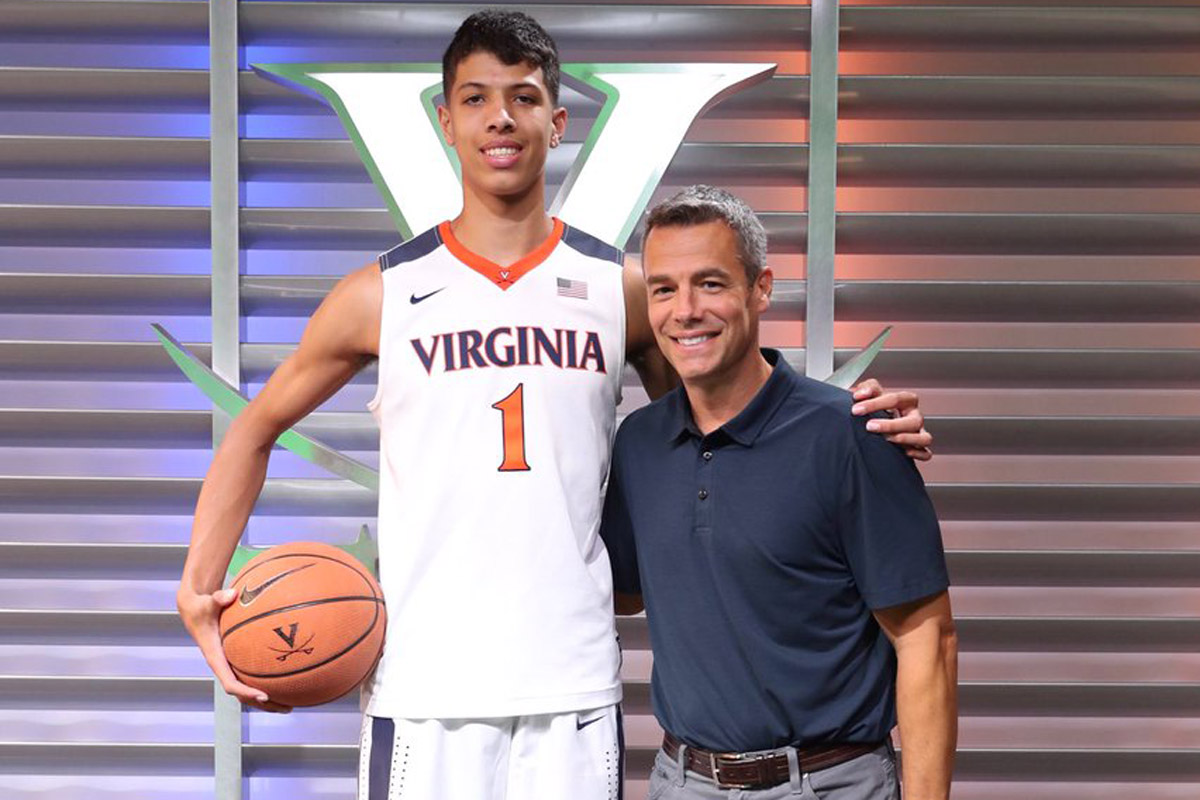 The high school recruits Virginia does attract are lower-ranked 4-stars and 3-stars that need time to reach their potential. Shedrick, a late bloomer that didn’t burst onto the scene as an elite recruit until the summer before his senior year, recognizes he needs to add strength and weight.

“I wanted to go to a school with a winning culture,” he said. “If I have to redshirt, I know I’ll be developing my game while I’m there. Coach Bennett is a great coach. It’s a successful program. I wanted to be a part of it.”

Virginia had only one senior in its playing rotation, center Jack Salt. The early draft decisions of Hunter and Jerome will determine if there are more returning starters than Kyle Guy (6-2, 175) and Mamadi Diakite (6-9, 228). Guy, a senior guard next year, led the Cavs in scoring with 15.4 points a game and Diakite, a redshirt senior forward next season, was fourth at 7.4 with 4.4 rebounds.

Shedrick, who dressed in Virginia gear while watching the NCAA games on TV, enjoyed the double-pleasure of the Cavaliers winning and envisioning himself fitting in among the players both on and off the court.

“I feel I play good defense and could see myself in in there protecting the rim like Mamadi was doing, especially late in the game,” Shedrick said. “That will be my main role and then hopefully I can contribute on offense, too.”

The other element of a team he recognized was the calm and cool nature of the Cavaliers in crunch time. On his recruiting trips and attending Senior Night, he gained a feel for the players’ individual personalities and team chemistry. Virginia needed remarkable last-second plays to force overtime to beat Purdue in the Elite Eight and Texas Tech in the championship. They also defeated Oregon 53-49 in the Sweet Sixteen and Auburn 63-62 in the national semifinal.

“The coolest thing to me was watching when they were down in the final seconds,” he said. “They didn’t quit and didn’t lose their cool. They stuck to their game plan and they were able to win. You could see (their personalities) at practice. Kyle and Ty were always loose and having fun. De’Andre is reserved and is always chilling, but he never quits and he is cool under pressure.”

A year ago Shedrick and Morsell ignored the pundits that said Tony Bennett can never win a national title. Yes, Bennett needed his 10th season at Virginia to finally win it all, but that rush to judgment overlooked Hall-of-Fame coaches John Wooden was at UCLA 16 seasons before he won his first of 10 and Dean Smith 21 at North Carolina before the first of his two.

Now that question is, can Bennett win multiple national titles?

Shedrick committed with his opinion a year ago.

-- Why do I write so much debunking the myths and fiction surrounding Bear Bryant and the 1970...

A half-century ago the NFL Draft was so low key and simple NFL commissioner Pete Rozelle stood at a...

Izzo embraces the Heathcote Way as the Spartan Way

One moment lost in analysis of Jalen Watts-Jackson’s Ranger Rescue was he benefitted from Michigan...

No school did more for the integration of college football than Michigan State coach Duffy...

In the media with Tom Shanahan and Jimmy Raye. Here you'll find sources from Fayetteville Observer,...