Sportswriters are both romantics and cynics. That’s why Inspector Renault, a cynical character in Casablanca, a romantic movie, so often appears in sports stories.

Sportswriter Adam Zagoria, who is covering the trial, posted this quote from Dawkins on his Twitter page:

“I wanted (Brian Bowen) to go to Michigan State. Tom Izzo told me flat out they WEREN'T going to pay him.”

Since the scandal erupted, some stories have paraphrased Renault expressing shock that players ask for money and coaches pay it with the help of shoe companies.

But the Izzo story is a twist on Inspector Renault. Someone should have stood up in court and exclaimed "shock" there was anyone that didn’t already know Izzo was clean.

Shoe money is why Bowen, who is from Flint, Mich., subsequently and mysteriously showed up at Louisville two years ago (although he was soon declared ineligible) rather than than Michigan State. And why Louisville coach Rick Pitino, who has a used car salesman look that is the antithesis of the blue-collar Izzo, was soon fired.

In a sad state of affairs, it also helps explain why Izzo comes in second or third place with so many 5-star and 4-star recruits.

A day before Zagoria quoted Dawkins, John Feinstein wrote this about Izzo in his column on the CBS Sport Radio website:

“One of the few big-time coaches I would stake my life on not being a cheater is Michigan State’s Tom Izzo. He talks often about how much the current climate disturbs him.

“He knows it’s nothing new—by any stretch. When his boss, Jud Heathcote retired in 1995, leaving the job to Izzo, he took his time turning his office over to the new coach. 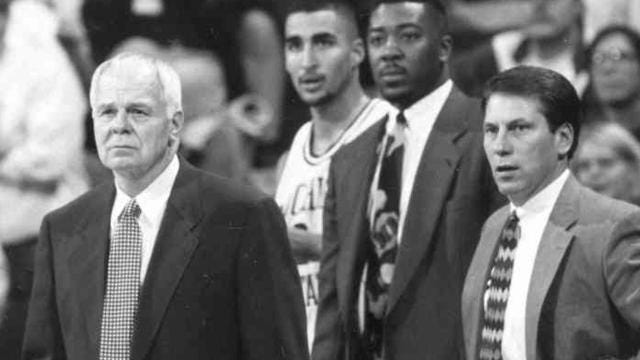 “Finally, one day in mid-summer, he walked in, cleaned everything out and said, ‘It’s all yours,’ ” Izzo recalled one night this past winter. “And, I’ll never forget, as he walked to the door, he turned to us and said, ‘When the time comes where cheating has become a good thing in coaching, it’s time for me to go.’ And then he went.”

Reading that, I immediately thought of when I was traveling through Spokane, Wash., a few years into Heathcote’s retirement days to be near his family in the Pacific Northwest.

Over lunch at Jack and Dan's Tavern, a Gonzaga-favored watering hole, Jud, unsolicited, graphically expressed his frustration over losing Chris Webber to Michigan in the Ed Martin scandal that forced Michigan to take down banners from the Fab 5 years.

I replied to Feinstein’s post with my thoughts, not necessarily expecting a reply. I just want to remind anyone reading it how fortunate Michigan State has been the past 43 years to have had Heathcote (19) and Izzo (24) leading the program.

It never hurts to have one of our era's great sportswriters and a bestselling author confirm your suspicions.

Again, it’s nothing new to hear about Izzo. Syracuse coach Jim Boeheim told me this at the start of last season when I asked him about Izzo overcoming an ESPN story that conflated the Larry Nassar gymnastics scandal with the Spartan’s football and basketball programs.

“He is one of the best guys I’ve known in coaching,” Boeheim said. “If anybody is doing things the absolute the right way, I believe it’s him – and I still do. I haven’t been proven wrong yet. I go on faith, and I think he’s a great guy, great coach and a man of absolute integrity – 100 percent. He had a very, very tough experience.”

If Boeheim had said anything otherwise, I would have stood and said, “I’m shocked, shocked.” Instead, everyone seated around the table just nodded their heads.