Lynch watched on Sundays as Air Coryell set the blueprint for NFL passing with quarterback Dan Fouts, a Pro Football Hall of Famer, piloting coach Don Coryell's offense from 1978 into the 1980s..

Fouts, 68, grew up a 49ers fan and played quarterback in the late 1960s at San Francisco’s St. Ignatius High. He spent many Sunday afternoons at old Kezar Stadium and later Candlestick Park, with a special view provided by his father, Bob, a 49ers broadcaster for two decades.

All these years later, the Lynch/Fouts roles have flipped. Funny how a symbiosis develops with overlapping circles lasting decades.

Now, the San Diego kid who grew up watching Fouts provide thrills is paying back Fouts as San Francisco’s general manager. The old quarterback’s boyhood team has been revived and is playing in the Super Bowl against Kansas City Sunday in Miami.

“Remarkable,” said Fouts when I asked about Lynch’s rebuild. “For them to go through a horrible season last year and make the Super Bowl, it’s amazing. They lost their quarterback (Joey Garoppolo) with the injury last year, but they made trades and they made moves. Ironically, losing Garoppolo helped them.”

He was referring to a 4-12 record that gave the 49ers the second pick of the 2019 NFL draft. They chose Ohio State defensive end Nick Bosa, an NFL Rookie of the Year candidate. He had two sacks of Minnesota’s Kirk Cousins in the divisional win and one of Green Bay’s Aaron Rodgers win the NFC championship victory. 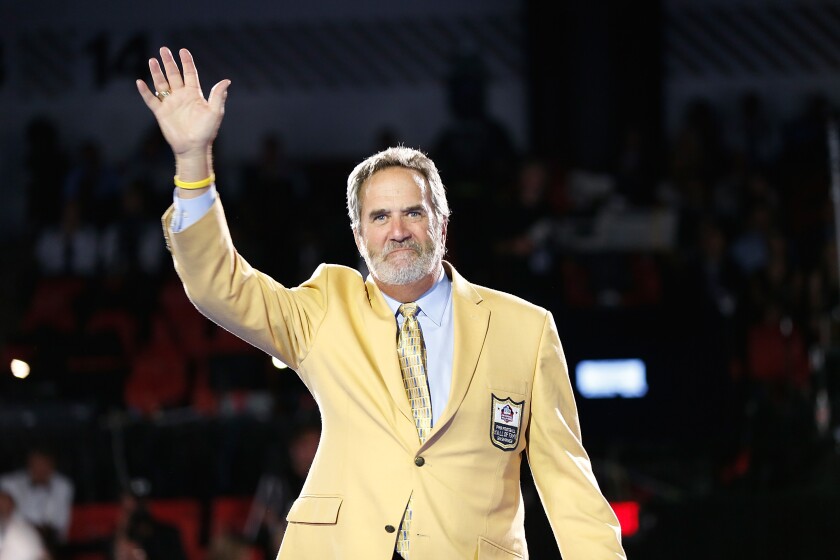 Although Fouts was aware of Lynch’s high school success in the Chargers' backyard, they never met until Fouts worked Monday Night Football telecasts and Lynch was launching his Hall-of-Fame candidacy as a safety for the Tampa Buccaneers. Fouts and the ABC crew met with players in telecast preparation.

In addition to the Super Bowl this weekend, Lynch is finalist for the Pro Football Hall of Fame for the seventh time for the Hall vote that takes place Saturday. He played for the Bucs from 1993 to 2003, winning Super Bowl XXXVII in the 2002 season in his hometown's Qualcomm Stadium. He played another four seasons for the Denver Broncos in his nine-time Pro Bowl career.

“I think he’s eventually a Hall of Fame player,” Fouts said. “Safeties are more difficult than cornerbacks to make the Hall because there aren’t a lot of stats to back a guy. It’s more of an impression. But the thing that works for him is interceptions are down and will continue to go down. That will work in favor of a guy like John."

Lynch, a 6-foot-2, 220-pounder, was known as a physical safety more than for picking off passes.

After Lynch’s playing career, he followed Fouts into TV as an analyst in 2008. But when the 49ers were looking for a new GM in 2017, Lynch pursued it and landed the job to work alongside head coach Kyle Shanahan.

“It’s a hard jump, period; for anybody,” Fouts said. “The scrutiny is intense. There are a lot of factors that go into winning – decision-making, scouting, trades – and all those things factor in. They seem to have a really good front office for doing that. John is a smart guy. He’s put together a good team in the front office. People really underestimate the teamwork involved in putting together an organization.”

Lynch, 48, engages regularly with fans on Twitter with 91,000 followers and with the players; many GMs typically distant themselves with fans and players.

"We’re all pulling hard for him,” said 49ers offensive guard Laken Tomlinson of the Hall-of-Fame vote. “John is a phenomenal person. He has had a great and prestigious career, but he’s still an easy person to talk to. When I was first traded here, I had heard about what kind of a man he was and I did my research before I met him. It was reconfirmed after meeting him and Shanahan and learning what they’re all about."

Lynch's first year, just before the 2017 season opener, the 49ers only gave up a fifth-round draft pick to the Detroit Lions for the former first-rounder. Tomlinson has started every game in three seasons but the 2017 opener.

“John was a player and has a lot of respect,” Fouts said. “I think John misses that part of his life as we all do. It’s a way for him to stay connected.”

Fouts, though, says he’s not interested in making the move from TV to NFL general manager.

“There are no teams in Sisters, Oregon,” he said of the town of 2,000 where the University of Oregon grad has lived since his playing days.

He otherwise has plenty of NFL associations to stay connected, especially with the revival of the 49ers.

“I’m enjoying it, but I wish they still were in the city,” he said, referring to the team's move to Levi’s Stadium that opened in 2014 in Santa Clara. “I grew up at Kezar and Candlestick. It hurts San Franciscans a lot. But the Super Bowl helps, no question.”