Photo: Terry Baggett at the 57th annual NFF dinner at the Waldorf Astoria

The journey toward Terry’s Baggett’s collegefootball denouement began with a recruiting pitch from a Penn assistant coach angled to favor the Philadelphia Ivy League school at the expense of West Point.

Instead, the Chicago Whitney Young running back felt challenged to learn more about Army.

Four years later, the 6-foot, 217-pounder's reward was more than a football uniform and a bowl game. On a December night in New York, he entered the elegant Waldorf Astoria ballroom dressed in his snappy West Point cadet gray uniform as a featured guest for the 57th annual National Football Foundation dinner. Baggett, soon tograduate from West Point as a lieutenant in the infantry, was one of 17 finalists for Campbell Trophy awarded to the nation’s top scholar-athlete.

“It all came to fruition for me with that moment,”Baggett said. “I spent four years balancing academics, athletics and themilitary aspect. To be honored for my academics in my military uniform at anathletic event brought it all back full circle to me. It was definitely a happy moment when I was evenprouder of my decision to come here than I had been ever before. There was alot of pride in that decision.”

Baggett's college destination was spurred by that Penn recruiter's comment the only better education he’d receive was at West Point, but “you’ll have to march all day.” The strategy backfired. Baggett, who wasn’t recruited by Army at thatpoint, was intrigued. He let West Point’s coaches know he was interested andbefore long they recruited each other with a commitment.

Starting with Beast Barracks, boot camp forfreshmen, Baggett made it through West Point as a four-year letterman and AcademicAll-American compiling a 3.368 grade-point average in chemical engineering. The NFF National Scholar-Athlete finalist award comes with an $18,000 post-graduate scholarship. On the field, he wasArmy’s 18th player with a 1,000-yard rushing season after he ran for1,113 as a junior in 2013, including a West Point record of 304 to beat EasternMichigan.

Baggett was Army’s 15th NFF NationalScholar-Athlete and the first since former teammate Andrew Rodriguez, who wonthe Campbell Trophy in 2011. The NFF dinner also enshrinedthe 2014 Class of the College Football Hall of Fame.

“Just being at the Waldorf Astoria, with all itsgrandeur, was an amazing experience,” he said. “The other athletes were amazingin their own right. It was great to be recognized as a finalist for an award that was wonby my former teammate, Andrew Rodriguez. There also was the Hall of Fame, pastHall of Famers and Heisman Trophy winners. The whole night was unbelievable.”

General Douglas MacArthur, who made the Waldorf Astoria his retirement years home, was a guest at the NFF dinners until his death in 1964. The MacArthur Bowl presented by the NFF to the college football's national champion is named for West Point grad and 5-star general. He was no doubt there in spirit approving of Baggett's award.

Baggett’s career was disrupted by a coaching change his senior year and that played a part in a decline in production his final season.After 141 carries for 1,113 yards and eight touchdowns in 2013, he carried only54 times for 400 yards and two touchdowns in 2014 under new head coach JeffMonken. The Black Knights finished with a 4-8 record, a 13th straight loss to Navy and a fourth consecutive year without a bowl game.

Slotbacks Baggett and Raymond Maples, a two-time1,000-yard rusher making a comeback from a season-ending injury in 2013, foundthemselves blocking more with defenses playing the outside run. Fullback LarryDixon led the team with 1,102 yards and nine touchdowns. Quarterback AngelSantiago was second with 814 yards and 10 touchdowns.

“My senior year didn’t turn out the way I hoped, butwe still got a lot better as a team,” Baggett said. “The biggest thing for mewas our team got better. That was more important to me than my carries, yardsand touchdowns. Our team was better than it had been the last three years. And we're going to get better and better." We’re going to be an Army team that istough at the end and wins games.”

Other athletes gracing the Waldorf Astoria thatnight, past and present, may have played in bigger games than Baggett, but in America's post-9/11 era, those men wanted to hear from him. They asked about theWest Point lifestyle demands and commitment after graduation.

“The biggest thing they wanted to hear was howmuch we go through with our rigid schedule and how we still have to excel onthe football field,” Baggett said. “They were in awe of that aspect. Some ofthe guys said my uniform looked better than their suits.”

And typical of a West Point cadet concerned aboutregulations and customs, Baggett fretted in his hotel room over pinning hisNational Football Foundation name tag on his uniform before he decided no onewould charge him with demerits; he headed down to ballroom and the festivities.

When it comes to recognizing the discipline and sacrifices of academyathletes, Stanford head coach David Shaw said it best in 2013 when he took the Cardinal to West Point for a game.

“I mentioned to the team we are playing againstyoung men willing to do things down the road the rest of us are not willing todo,” Shaw said. “These people deserve our utmost respect. Our freedom is intheir hands.”

Football fans have been obsessed this time of year with 40-yard sprint times and the NFL draft, so it’s worth highlighting West Pointcadets such as Baggett and Shaw’s words that are deeper than the usual rhetoric.

“There are terrorists out there, but I look for goodthings in this world,” Baggett said. “For me, it’s the good things that areworth fighting for in our society and world. Goodness triumphs over the periods ofevil that we see. That makes it worth going into the Army and the infantry evenif it’s one of the most dangerous branches.

“I haven’t been in the regular Army yet, but I’ve seenhow the guys work. They train harder and better than anybody anywhere else. IfI have to go into that terrorist environment, there is nobody I’d rather beworking with than the U.S. Army.” 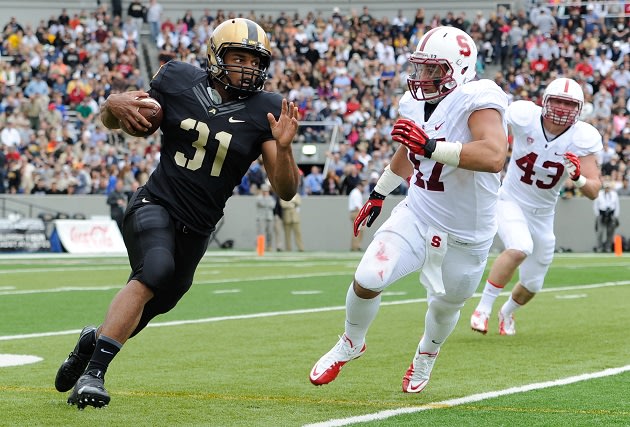 Transcript from the NFF press conference with Baggett and 16 other National Scholar-Athletes conducted by Bonnie Bernstein days before the Army-Navy Game:

TERRY BAGGETT: Thank you, Bonnie. I'd like to echo what everyone else has been saying here all daytoday. It's truly an honor and privilege to be considered in this group of menhere and the long group that has come before us in scholar-athletes. And it'san honor. It's unbelievable.

BONNIE BERNSTEIN: Gearing up for your final Army/Navy game.

TERRY BAGGETT: I am.

BONNIE BERNSTEIN: Saturday. I can't put into words how patriotic I felt when I had the chance tocover after 9/11. And I'm wondering, as someone who is taking the field in thisgame for the very last time, what it means to you.

TERRY BAGGETT: For me,it's the culmination of having some of the greatest opportunities that life can offer to play football and then to go on and lead people in this nation and to follow in the footsteps of people who have given their lives for everything that we stand for and everything that we have today. So with that, I mean, itmeans that I'm going to go out there, give everything that I have to play thatone last game, representing the United States Military Academy, going on torepresent the United States Army.

BONNIE BERNSTEIN: You have your military career in front of you, on behalf of everybody in this room and everybody who is watching, thank you in advance for your service. Congratulations.

One of the hottest stories in college and pro football is speculation on where Jim Harbaugh will...

Jud for the defense on best Mark Few team

Jud Heathcote, whose second team has been Gonzaga since he retired to Spokane 20 years ago, enjoyed...